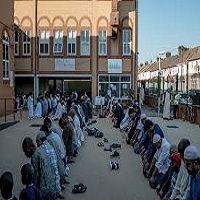 People online are expressing support for Muslims after letters were sent urging violence against them on 3 April, so-called “Punish a Muslim Day”.

A police investigation has been taking place since letters and online images circulated in March advocating a points-based system for the performance of violent acts against Muslims. Four Labour MPs also received the letters.

Community leaders in the UK are encouraging Muslims not to change their behaviour because of scaremongering tactics.

#PunishAMuslimDay and counter-hashtag #LoveAMuslimDay, as well as #WeStandTogether, are trending with more than 42,000 tweets sent, many urging Muslims to ignore the threats.

In a statement, the Metropolitan Police said: “At this time there is no credible information to suggest there is any criminal activity that will take place. We will be encouraging local faith and community networks to take part in a ‘#WeStandTogether’ campaign.”

Rattled by reports of increased hate crime in the UK and a video currently circulating online of a Muslim woman being attacked in an American hospital, some people expressed anxiety online about their personal safety.

The organisation Tell Mama, which monitors anti-Muslim hate crime, told the BBC it has passed to the police evidence about 20 cases of individuals who received letters referring to “Punish A Muslim Day”.

“We believe that Muslim communities have reacted with tolerance,” director Iman Atta said.

Communities across the UK have been responding to violent threats contained in a letter promising that 3 April would be “Punish a Muslim Day”.

The phrase was coined in an anonymous letter distributed to some homes and businesses last month, with recipients in east London, the Midlands and Yorkshire. The letter suggested people could win “points” for a range of activities aimed at Muslims, including removing a headscarf from a woman or beating a person up. Muslim MPs were also sent the letter.

Events have been planned across the country to show opposition to the threats. Nottingham is hosting a Love a Muslim Day event, scheduled to take place at the city’s Brian Clough statue between 2pm and 8pm. It will feature music and poetry, and organiser Farouk Azam says the event is an “opportunity for good people in Nottingham to stand together in solidarity, to show we can live side by side in a city we love”.

There are also #LoveAMuslimDay events planned in Bradford, Wakefield, Sheffield and Leeds, and Stand Up to Racism Edinburgh will hold a demonstration in the Scottish capital.

The #LoveAMuslimDay hashtag originated with an alternative letter circulated by the charity Muslim Engagement and Development (Mend). Written by its Yorkshire & Humber regional manager, Shahab Adris, it suggests getting points for smiling at a Muslim or inviting them into your home.