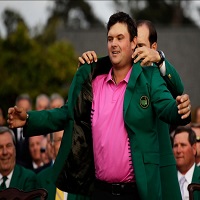 AUGUSTA, Ga. — Never one to back down from a fight, Patrick Reed sure had one on his hands Sunday in the final round of the 82nd Masters.

The hero of the 2016 Ryder Cup took some mighty blows from Augusta National Golf Club but never went down – he is Captain America, after all – and now has a green jacket to drape over his red, white and blue cape.

Armed with a three-shot lead after 54 holes, Reed, the fiery, confrontational raging bull, channeled his emotions, held his nerve and called upon his considerable golf skills to withstand a host of the game’s best players on a tense, wild Masters Sunday that had the staff handling the famous white scoreboards working overtime.

“To win your first major is never going to be easy,” said Reed, who had never broken 70 in his previous four starts in the Masters. “It definitely wasn’t easy today. I knew it was going to be a dogfight.

“It’s just God basically saying, ‘Let’s see if you have it.’ Everyone knows you have it physically with the talent, but do you have it mentally? Can you handle the ups and downs throughout the round?”