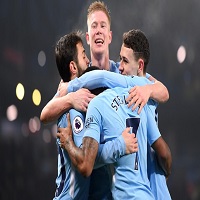 With Kompany watching on at his wife’s family home after City’s 3-1 victory over Tottenham on Saturday evening meant United had to avoid defeat against Albion to keep the title race alive, Jay Rodriguez’s goal at Old Trafford ensured the trophy will head to the other side of Manchester for the third time in seven seasons.

“You can’t take them for granted – I’ve been lucky to win three but there have been so many I’ve missed as well,” said Kompany. “Today I’m happy and I suppose my team-mates will roll their eyes a little bit but I kind of want to see what the reaction is going to be now. I’ve never retained the title and I want to see if this team has got it to carry on and be even more successful.”

He added: “I had that feeling when I woke up this morning but I don’t like to wait and see a team lose so it was a little bit of a different experience today. West Brom are a good team and they don’t deserve to be that low and as they stuck into the game you realised that something could happen. It was a set piece and a lovely goal from Rodriguez so thank you. It was a great feeling.”

Guardiola, who said on Saturday that he would be playing golf rather than watching the match, can now add a Premier League winner’s medal to those he claimed in the Bundesliga with Bayern Munich and La Liga with Barcelona. City players posted celebratory messages on Twitter with Kevin De Bruyne writing: “Unbelievable season for us. Very happy to call us champions this year.”

Confirmation of the title success comes as a fillip at the end of a difficult spell for City, during which they lost in the Manchester derby and suffered a Champions League exit at the hands of Liverpool. By completing the job after 33 games, City have emulated the achievement of United, who also secured the crown with five matches to spare in 2001.

The Manchester United manager, José Mourinho, said City’s consistency had earned them the title. “Manchester City won the title because they won more points than everybody else, because yesterday they won against Tottenham, because during the season they lost only two matches,” he said.

Speaking after the victory over Tottenham which took him to the verge of his 20th trophy as a manager, Guardiola singled out the win over Chelsea in September as the moment his side believed they could triumph.

“We played so well in many, many games,” he said. “I think winning in Stamford Bridge gave us the confidence that we could do it. Last season against contenders was not so good – we won few games. Against the last champions that gave us the belief that we were able to go there and play the way we played. But in general we were so stable. We conceded goals but the most important detail is not the goals you concede but the chances we concede. In every game it was few.”

Worryingly for City’s rivals, there are no signs that this is the culmination of their journey either. As Guardiola pointed out, the majority of his squad have youth on their side and yet more investment will no doubt follow in the summer. But while their manager admitted the relative inexperience of some of his players may have counted against them in the Champions League, Guardiola believes the standards they have set this season can be an inspiration for the future.

“We won with guys who are so young – sometimes playing with guys who that age in the Champions League is complicated. But maybe it was a good lesson for the club for next season,” he said.

“We will have to try [to get better]. If you read what the people said this week we have to improve a lot. You judge results but we cannot deny that this season we were good. Every single day. To win 18 games in a row you have to be mentally strong and today showed me how strong they are. That is important to help us believe. Manchester City is not like United or Chelsea or Arsenal. The big clubs in England they have a lot of trophies and a lot of history behind them so sometimes you have to do these kind of things to make you believe: ‘Wow, we are good too.’

“Of course the same isn’t going to happen next season but that is the target. We were able to do it once and that means you can do it twice. We have to try next season to be better.”