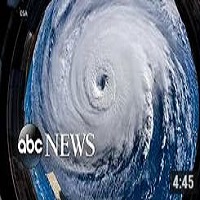 Hurricane Florence, a Category 2 storm, has started lashing North Carolina, with tropical storm-force winds carrying drenching bands of rainfall onto some beach communities Hurricane-force winds extend outward up to 80 miles from Florence’s center, and tropical-storm-force winds extend outward up to 195 miles, National Hurricane Center (NHC) says The storm is centered about 100 miles east-southeast of Wilmington, North Carolina, and about 155 miles east of Myrtle Beach, South Carolina, moving northwest at 5 mph with maximum sustained winds of 100 mph, says the NHC’s 5 p.m. ET advisory Forecasters don’t expect the storm to strengthen before it moves ashore, but they say the real problem will be water as it lingers along the coast through Saturday “It truly is really about the whole size of this storm,” NHC Director Ken Graham says. “The larger and the slower the storm is, the greater the threat and the impact — and we have that.” About 5.25 million people live in areas under hurricane warnings or watches, and 4.9 million more live in places covered by tropical storm warnings or watches, National Weather Service (NWS) says