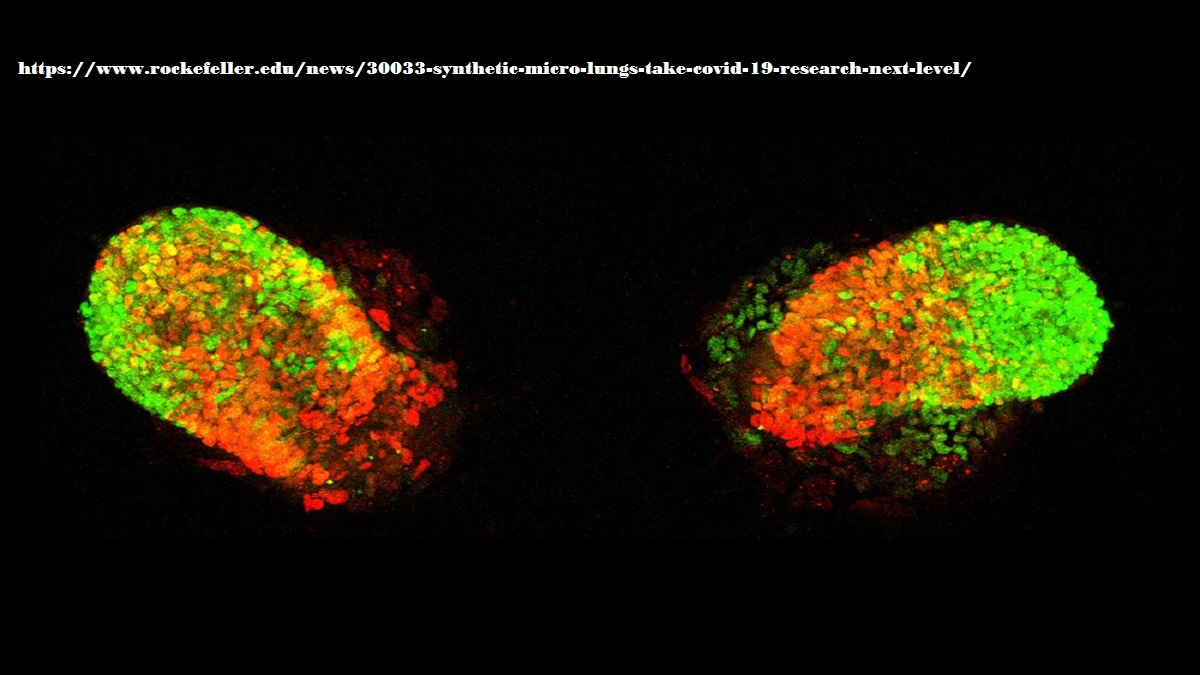 When SARS-CoV-2 began its furious spread around the globe, it took scientists only a few months to develop the first tools to study or neutralize the virus. What’s been missing until now, however, are reliable methods to pinpoint the disease—not the pathogen per se, but the complex biological events playing out inside infected human cells and tissues.


Research aimed to understand how COVID-19 wreaks havoc in the lungs, for example, has often been done with miscellaneous lung cancer cells that show crucial differences with the cells targeted by the virus.

“There has been too much shifting ground for precise work,” says Ali H. Brivanlou, Rockefeller’s Robert and Harriet Heilbrunn Professor.

Now, Brivanlou’s lab is introducing stem-cell based technology that makes it possible to mass-produce tissue cultures mimicking lung buds, the embryonic structures that give rise to our breathing organs. When infected with SARS-CoV-2 in the lab, these synthetic “micro lungs” offer a powerful model to investigate the mechanisms of COVID-19 and screen for new drugs.

The findings are available online on the preprint server bioRxiv ahead of publication in a peer-reviewed journal.

From carpets to clumps

Postdoctoral fellow Edwin Rosado Olivieri arrived in Brivanlou’s lab in early 2020, shortly before New York state went into lockdown. A former graduate student at Harvard University, he had come to investigate how visceral organs such as the gut, liver, and pancreas take shape during embryonic development, but immediately switched plans to work on the novel coronavirus.


In ordinary lab experiments, cells are grown in a single-layer carpet, firmly attaching themselves the bottom of the dish without receiving much input from their neighbors. To see if he could induce lab-generated stem cells to self-organize into something more closely resembling embryonic lung tissue, Rosado Olivieri instead grew them within an elaborate matrix, coaxing the cells to climb atop and around one another and exchange messages, like real stem cells do in the course of development.

At carefully adjusted time points, he stimulated the cells with signals mimicking the ones guiding lung-cell differentiation in embryonic networks. After two weeks, the cells had formed identical buds whose molecular profiles closely matched those seen in the earliest stages of fetal lung development—including the formation of airways and alveoli, structures known to be damaged in many people with severe COVID-19.

Next, the researchers bathed the lung buds with three COVID-19 antibody drugs, two of which are being studied in human trials, and teamed up with colleagues in the lab of Charles M. Rice to infect the buds with SARS-CoV-2. These experiments showed that the infected buds offer a realistic disease model in which to assess the potency of novel drug compounds; as the scientists had hoped, different antibody combinations curtailed infection at levels akin to those seen in previous experiments.

The researchers say other efforts have been made to study COVID-19 in synthetic tissues such as lung organoids but emphasize that the new system is uniquely practical because it can easily be scaled up to produce vast amounts of lung tissue. “The synthetic human lung buds allow us to recapitulate key hallmarks of the disease that are otherwise inaccessible for experimentation,” Rosado Olivieri says. “They provide us with an opportunity to understand how this virus interacts with lung cells and induces pathologies.”


Moreover, by offering an unlimited source of disease-relevant tissue, the model will make it possible to screen vast chemical libraries for drugs that could potentially be used to “block and tackle COVID-19 or other respiratory viruses that may emerge in the future,” Rosado Olivieri says. And its applications might extend even further.

“The lung buds will allow us to recapitulate the molecular events driving normal lung development as well as those underlying lung cancers, respiratory infections, and a number of lung diseases for which there are currently no treatments,” Brivanlou says.