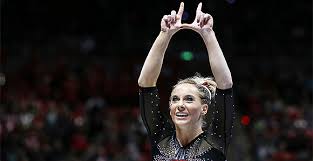 MyKayla Skinner’s Olympic journey has effectively come to an end. The 24-year-old had one of the best overall meets of her career, but she failed to qualify for an event final.

How did MyKayla Skinner and Grace McCallum do in Olympic qualification?

Heading into the qualification round at the Tokyo Olympics, both MyKayla Skinner and Grace McCallum had already seen their dreams come true.

The goal, for years if not longer, had been to make it to the Olympic Games and both Skinner and McCallum accomplished that.

Once in Tokyo, though, the goal understandably had to shift, so the duo set their sights on qualifying for individual event finals, with McCallum also hoping to help the four-woman U.S. team in whatever way she could in their quest to win a gold medal.

For MyKayla Skinner, her time in Tokyo has come to an end.

On Sunday, the 24-year-old gymnast, who competed as an individual and not as a member of Team USA, did not qualify for any event final after competing on all four apparatuses during the qualifying round and finished the all-around in 10th place with a total score of 55.398.

Skinner, who is a first-time Olympian and the oldest gymnast of the American women, will not be able to compete for a medal on Thursday when the top 24 gymnasts (with the top cumulative individual scores) advance to the individual all-around final, which has a limit of two gymnasts per country.

The domination of the U.S. women’s gymnastics team was one of the expected storylines of the Tokyo Olympic Games. But they hardly looked anything like the dominating team they are supposed to be during their qualifying round.

The U.S. qualified for Tuesday’s team finals, but did so finishing second to Russia in their qualifying round after a series of mishaps, totaling 170.562 to Russia’s 171.629. Luckily for the U.S., Sunday’s scoring doesn’t carry over to the finals so the U.S. will get a much needed fresh start.

When not training in the gym or competing at the 2020 Tokyo Olympics, 5’1 American gymnast MyKayla Skinner spends time with her husband, Jonas Harner. The former track & field star (Javelin, Discus) is 6’7″ tall!