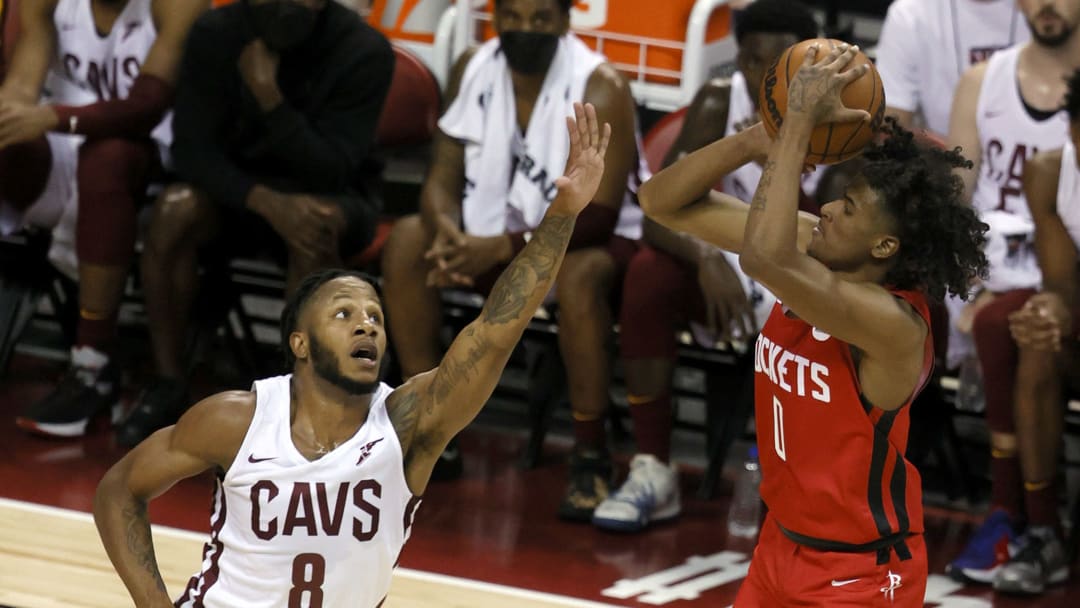 A new era of Houston Rockets basketball kicked off last night when Jalen Green and the Rockets took on the Cleveland Cavaliers in Summer league play. Green showed why he was the number two overall pick and why he may be the best player in the draft.

Green displayed his vast offensive skills from his quick first step, stepback jumper, and elite balance. Green helped lead the Rockets to an 84-76 win, finishing with 23 points on 50-percent shooting. It was evident early that Green’s time down in the G-League helped mold his overall game as he showed playmaking skills and good off-the-ball defense, poking the ball away several times.

Jalen Green was always destined to get buckets in the NBA. He was already a consensus five-star recruit by the time he entered high school, and arguably the most famous teenage hooper of his generation this side of Zion Williamson and LaMelo Ball by the time he left it. Green’s ridiculous leaping ability, explosive scoring outbursts, and California roots helped him draw comparisons to Kobe Bryant from an early age. While it’s never fair to compare such a young player to a Hall of Famer, it was clear this was the type of talent who deserved to be talked about in hallowed terms.

After years of speculation over where he’d play in college (he pioneered the G League Ignite program instead) and how high he would go in the draft, Green has finally reached the NBA. It’s only Summer League, but it’s already apparent the prophecy of Green’s scoring ability at the highest levels of the game is all but a sure thing.

Green scored 23 points to lead all five starters in double figures, winning a matchup with No. 3 overall choice Evan Mobley of Cleveland as the Rockets beat the Cavaliers 84-76 on Sunday night.

A couple of hours before Atlanta and Boston tipped off to open the Las Vegas Summer League, the league announced the postponement of the Wizards’ game against the Pacers because contact tracing left Washington without enough players.

While watching the electric summer league debut by Houston Rockets rookie Jalen Green, Memphis star Ja Morant tweeted “JG4.” That points to Green’s nickname, which is based on his initials and jersey number of choice throughout high school and in 2021 with the G League Ignite.

At the moment, though, Green is wearing No. 0 with the summer Rockets — rather than his usual No. 4. Neither the team nor Green has officially explained why, but when asked how it felt to see his NBA jersey for the first time, Green went out of his way to address the fact that it wasn’t his number. Here’s what the 6-foot-6 guard, who was selected at No. 2 overall in the 2021 NBA draft, said after Sunday’s victory:

The start to the Las Vegas Summer League has been everything Houston fans have been waiting for, and more. The No. 2 overall pick in this years draft, Jalen Green, just showed out in his Summer League debut, dropping 23 points and five boards while shooting a clean 9-for-18 from the field and 44.4 percent from beyond the arc.

Jalen Green is for the here and now: ‘You’re going to see a lot more’

LAS VEGAS — As familiar faces filled the stands of Thomas & Mack Center to enjoy an NBA Summer League basketball game on a sticky Sunday afternoon — some semblance of normalcy — former Prolific Prep head coach Joey Fuca had something else on his mind as he nestled into his seat.

Before Jalen Green went second overall to the Houston Rockets a few weeks ago, before he ever stepped foot in the G League, he was playing his senior season for Fuca at Prolific, a preparatory high school in Napa Valley.