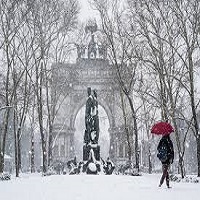 The calendar read April 2, but heavy, wet snow poured down in New York City early Monday. The big, fat flakes piled up quickly and, despite the temperature hitting 60 degrees the day before, stuck to everything.

By 10 a.m., 5.5 inches had accumulated in Central Park, the most during April since 1982, when 9.6 inches fell on the 6th of the month. The amount was the seventh most on record in April, less than two inches away from making the top five.

NYC could get 7 inches of snow today

New Yorkers woke up to yet another winter storm this morning, which had started coming down on the city shortly before dawn on Monday. The National Weather Service issued a Winter Weather Advisoryyesterday which started at 2 a.m. on Monday and remains in effect until 2 p.m.

This latest snowstorm is expected to bring anywhere between four to seven inches of snow to the city with about one to two inches of snow expected per hour, according to the National Weather Service.

The snow refused to call it quits Monday morning as it taunted long-suffering New Yorkers with another potentially messy commute.

Meteorologists spied light traces of the defiant snowfall just before 4:30 a.m. in Central Park during the latest round of winter weather to strike the tri-state region.

The bulk of the snow was slated to hit northeast New Jersey overnight before coming to an end by noon.

An accumulation of three to five inches of snow is a possibility in parks and colder surfaces outside Manhattan but meteorologists don’t expect more than an inch to stick in urban areas due to a recent streak of warm temperatures. The snow in NYC is expected to wrap up its business by 10 a.m. and melt completely by the afternoon.