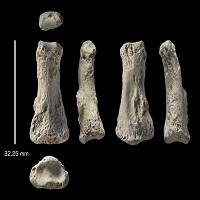 Researchers say it shows hunter-gatherers had reached that area by 85,000 years ago. Previously discovered human fossils show an earlier human presence in Israel and possibly China.

Scientists believe early people left Africa more than once after evolving there at least 300,000 years ago.

The bone, from an adult and most likely a middle finger, was found in 2016 about 340 miles (550 kilometers) southeast of the Sinai Peninsula. Michael Petraglia (peh-TRAH-lee-uh) of the Max Planck Institute for the Science of Human History in Jena, Germany, says the ancient people probably left Africa through the peninsula.

He and others report the discovery Monday in the journal Nature Ecology & Evolution.