These 5 habits could add 10 years to your life, study suggests 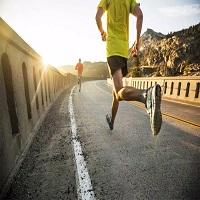 Researchers at Harvard University analyzed data from two major studies featuring information on dietary, lifestyle and medical histories from more than 120,000 participants. They found men and women who followed all five habits were 82% less likely to die of cardiovascular disease and 65% less likely to die from cancer.

“Quantifying the association between healthy lifestyle factors and longer life expectancy is important not only for individual behavioral changes but also for health communicators and policy makers,” said lead author Frank B. Hu, M.D., Ph.D., head of the Department of Nutrition at the Harvard T.H. Chan School of Public Health in Boston, in a statement. “It is critical to put prevention first.”

The study also suggests women who adopted all five habits could add an extra 14 years to the lives of women over age 50, and 12 years for men.

According to the Centers for Disease Control and Prevention, heart disease and cancer are the top two leading causes of death in the United States, based on data from 2015.

The U.S. ranks 43rd in global life expectancy, according to the CIA’s World Factbook, with the average person living until 80 years old. By comparison, the top-rated country, Monaco, boasts a life expectancy of 89 years old.