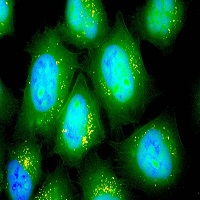 Messenger RNA, which can induce cells to produce therapeutic proteins, holds great promise for treating a variety of diseases. The biggest obstacle to this approach so far has been finding safe and efficient ways to deliver mRNA molecules to the target cells.

In an advance that could lead to new treatments for lung disease, MIT researchers have now designed an inhalable form of mRNA. This aerosol could be administered directly to the lungs to help treat diseases such as cystic fibrosis, the researchers say.

“We think the ability to deliver mRNA via inhalation could allow us to treat a range of different diseases of the lung,” says Daniel Anderson, an associate professor in MIT’s Department of Chemical Engineering, a member of MIT’s Koch Institute for Integrative Cancer Research and Institute for Medical Engineering and Science (IMES), and the senior author of the study.

The researchers showed that they could induce lung cells in mice to produce a target protein — in this case, a bioluminescent protein. If the same success rate can be achieved with therapeutic proteins, that could be high enough to treat many lung diseases, the researchers say.

Asha Patel, a former MIT postdoc who is now an assistant professor at Imperial College London, is the lead author of the paper, which appears in the Jan. 4 issue of the journal Advanced Materials. Other authors of the paper include James Kaczmarek and Kevin Kauffman, both recent MIT PhD recipients; Suman Bose, a research scientist at the Koch Institute; Faryal Mir, a former MIT technical assistant; Michael Heartlein, the chief technical officer at Translate Bio; Frank DeRosa, senior vice president of research and development at Translate Bio; and Robert Langer, the David H. Koch Institute Professor at MIT and a member of the Koch Institute.

Messenger RNA encodes genetic instructions that stimulate cells to produce specific proteins. Many researchers have been working on developing mRNA to treat genetic disorders or cancer, by essentially turning the patients’ own cells into drug factories.

Because mRNA can be easily broken down in the body, it needs to transported within some kind of protective carrier. Anderson’s lab has previously designed materials that can deliver mRNA and another type of RNA therapy called RNA interference (RNAi) to the liver and other organs, and some of these are being further developed for possible testing in patients.

In this study, the researchers wanted to create an inhalable form of mRNA, which would allow the molecules to be delivered directly to the lungs. Many existing drugs for asthma and other lung diseases are specially formulated so they can be inhaled via either an inhaler, which sprays powdered particles of medication, or a nebulizer, which releases an aerosol containing the medication.

The MIT team set out to develop a material that could stabilize RNA during the process of aerosol delivery. Some previous studies have explored a material called polyethylenimine (PEI) for delivering inhalable DNA to the lungs. However, PEI doesn’t break down easily, so with the repeated dosing that would likely be required for mRNA therapies, the polymer could accumulate and cause side effects.

To avoid those potential side effects, the researchers turned to a type of positively charged polymers called hyperbranched poly (beta amino esters), which, unlike PEI, are biodegradable.

The particles the team created consist of spheres, approximately 150 nanometers in diameter, with a tangled mixture of the polymer and mRNA molecules that encode luciferase, a bioluminescent protein. The researchers suspended these particles in droplets and delivered them to mice as an inhalable mist, using a nebulizer.

“Breathing is used as a simple but effective delivery route to the lungs. Once the aerosol droplets are inhaled, the nanoparticles contained within each droplet enter the cells and instruct it to make a particular protein from mRNA,” Patel says.

The researchers found that 24 hours after the mice inhaled the mRNA, lung cells were producing the bioluminescent protein. The amount of protein gradually fell over time as the mRNA was cleared. The researchers were able to maintain steady levels of the protein by giving the mice repeated doses, which may be necessary if adapted to treat chronic lung disease.

Further analysis of the lungs revealed that mRNA was evenly distributed throughout the five lobes of the lungs and was taken up mainly by epithelial lung cells, which line the lung surfaces. These cells are implicated in cystic fibrosis, as well as other lung diseases such as respiratory distress syndrome, which is caused by a deficiency in surfactant protein. In her new lab at Imperial College London, Patel plans to further investigate mRNA-based therapeutics.

In this study, the researchers also demonstrated that the nanoparticles could be freeze-dried into a powder, suggesting that it may be possible to deliver them via an inhaler instead of nebulizer, which could make the medication more convenient for patients.

TranslateBio, a company developing mRNA therapeutics, partially funded this study and has also begun testing an inhalable form of mRNA in a Phase 1/2 clinical trial in patients with cystic fibrosis. Other sources of funding for this study include the United Kingdom Engineering and Physical Sciences Research Council and the Koch Institute Support (core) Grant from the National Cancer Institute.