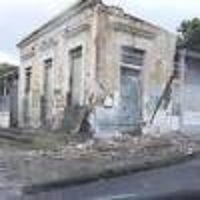 A 5.5-magnitude earthquake off the coast of the Puerto Rico rattled residents of the island nation awake Saturday morning, many of who were left without power in wake of the massive tremor.

It struck around 7:20 a.m. local time near the city of Ponce and the towns of Guanica and Guayanilla, a region that has already been hard hit by a spate of earthquakes starting in late 2019, according the U.S. Geological Survey.

Several buildings were damaged in the early-morning quake but no injuries or casualties have been reported.

Reports of damage were still trickling in early Saturday morning, with at least one second-story balcony crashing in the southern city of Ponce, city spokeswoman Inés Rivera said. Meanwhile, cracks in homes were reported in Guayanilla.

Ponce Mayor María Meléndez tweeted images of the damages Saturday morning while also urging people to “avoid going to the city center until we make sure everyone is safe.”