Lane Kiffin Reveals How Much Weight He Lost This Offseason 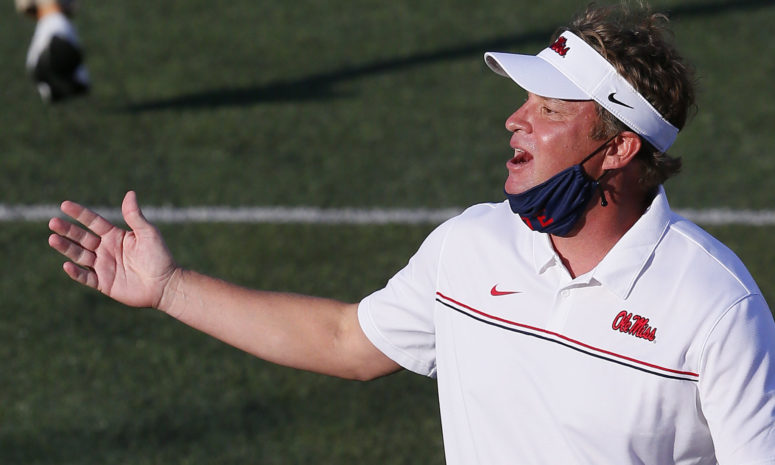 Ole Miss football held its second practice of the fall Monday, its first that was open to the media. The Clarion Ledger was on hand, observing as junior quarterback Matt Corral led his offense and a defense infused with new depth battled against him.

The Rebels looked predominantly healthy. Tight end Casey Kelly was the only regular player absent from practice and only a handful of contributors were in non-contact black jerseys, including safety Jake Springer, cornerback Markevious Brown and defensive tackle Tywone Malone.

Ole Miss head coach Lane Kiffin finally looked in the mirror and didn’t like what he saw.

He decided to make some changes, starting with losing 30 pounds over the offseason. It’s all part of holding himself and his players accountable if they want to become a consistent winner in the brutal SEC.

“I saw a picture of me at the bowl game last year and told the players I looked like an anaconda that had swallowed a deer and the deer got stuck in its neck,” Kiffin said to ESPN. “Here I am in postseason meetings back in January telling my offensive linemen and other guys that they needed to eat better, lose weight, get in better shape, and I looked like a whale.”

Lane Kiffin Reveals How Much Weight He Lost This Offseason

Kiffin revealed in an interview with ESPN that he decided he was going to lose weight after noticing how big he’d gotten after looking at a bowl game photo.

“I saw a picture of me at the bowl game last year and told the players I looked like an anaconda that had swallowed a deer and the deer got stuck in its neck,” Kiffin told ESPN.

Kiffin, 46, set out to lose a lot of weight this offseason. He accomplished his goal.

Sometimes it takes the most unlikely heroes to save the day.

And hopefully, those heroes will be Ole Miss and the rest of the SEC football programs who are choosing to get vaccinated to help the country fight off the Delta variant and every other mutation of COVID-19.

Ole Miss head coach Lane Kiffin said basically his whole organization has been vaccinated against COVID-19 before the start of the 2021 season.

Lane Kiffin, head football coach at Ole Miss, recently said that all of the team’s players and staff members are vaccinated against COVID-19.

Kiffin told ESPN that the Ole Miss football team has a 100 percent vaccination rate among those who made it to the practice field on Sunday, ahead of the team’s regular season, which will begin on September 6.

“It’s pretty amazing and great motivation for our fans and the state,” Kiffin told ESPN while speaking about the team’s vaccination rate.

Lane Kiffin Has Incredible Quote About How Fat He Had Gotten, Has Lost 30 Pounds This Offseason

Living in Oxford, Miss. is dangerous for the waistline, and Lane Kiffin learned that as soon as he arrived on the scene at Ole Miss last year. You can’t blame the man, Southern food is the best food, and there is a plethora of it in small-town Mississippi.

After indulging a bit last year, Kiffin made the decision to get into shape this offseason and has lost 30 pounds. One photo from Ole Miss’ bowl win over Indiana in January was one of the driving forces behind him wanting to lose weight, and how Kiffin described himself in the quote is an all-timer.

“I saw a picture of me at the bowl game last year and told the players I looked like an anaconda that had swallowed a deer and the deer got stuck in its neck,” Kiffin told ESPN.

Lane Kiffin Has Lost 30 Pounds, Says He Used To Look Like A ‘Whale

Kiffin noticeably gained a lot of weight after leaving Alabama as he took head coaching jobs at FAU and Ole Miss. During a recent interview with Dan Patrick, he looked noticeably slimmer and he recently revealed to ESPN that he’s lost 30 pounds. (RELATED: David Hookstead Is The True King In The North When It Comes To College Football)